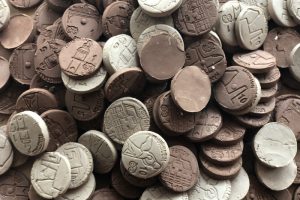 Organisers of an innovative volunteer reward scheme are seeking corporate sponsors to help with a large-scale event which will take place at venues throughout Stoke-on-Trent and Newcastle-under-Lyme in November.

CounterCoin – a volunteer reward scheme which is aiming not just to revolutionise the social demographic but also help the regeneration of town centres – is to host “The CounterCoin Challenge” on 21 November.

CounterCoin is a groundbreaking way of incentivising, recognising and rewarding acts that have a positive social impact within a community. Volunteers are rewarded at the rate of 5 CounterCoin for each hour they work and this can then be exchanged at participating businesses, perhaps for perishable goods, or to use up spare capacity, or sometimes simply in exchange for a price discount on goods for sale. It is totally at the discretion of a business to determine how many CounterCoin they accept for goods or services.

Brian Leyland, Director of Hometown Plus Limited, the creator of CounterCoin, said: “These rewards are provided at little or no cost to a participating business and by reducing waste and eliminating spare capacity we are at the same time promoting a more sustainable and efficient local economy.”

CounterCoin is issued by charities and social enterprises who are encouraged to develop roles for the volunteers which consist of qualifying activities – broadly those which contribute to community and/or are of benefit to society.

Brian adds: “We are targeting those volunteers who may feel alienated from or disillusioned with present day society. By valuing the work they do we are trying to increase their sense of self-worth and self-confidence, helping them to re-engage with society and where appropriate providing a pathway to employment. We want to give people a renewed purpose in life as well as a sense of identity and belonging.”

CounterCoin was the brainchild of Mike Riddell, also a Director of Hometown Plus, who said: “The Stoke-on-Trent area was the ideal location for us to launch CounterCoin – the disenchantment of the local population with the postindustrial world in which they live, led to it being dubbed the “Brexit Capital” of the country by the media. It is also one of the poorest regions in the UK. We want to convince people that if we all pull together we really can create a society which works for everyone and we have had some fantastic support from many local organisations in getting as far as we have.”

On 21 November, the plan is for CounterCoin to hold workshops across 7 venues in Longton, Fenton, Burslem, Tunstall, Hanley, Stoke and Newcastle-under-Lyme. Corporate sponsors are actively being sought for both the overall event and the individual locations. The workshops will see volunteers taking part in “The CounterCoin Challenge” – a fun competition to see who can make the most clay coins which will then be used as part of the scheme. Each coin made will bear the stamp of the town in which it is made and members of the public are also invited to join in on the day.

Mike said: “We are hoping for a good turnout to the event which will target the whole of the Stoke-on-Trent and Newcastle-under-Lyme areas. This is just the beginning and we are simply asking for help from anyone to come forward who would like to be involved in what we are doing”.

It has already been confirmed that the YMCA in Hanley, social enterprise café Cultural Squatters in Newcastle-under-Lyme, Stoke Art Stop, Fenton Manor Leisure Centre, Tunstall Market, Longton Community Fire Station and The Co-Operative Academy of Stoke-on-Trent will be hosting workshops on 21 November. Workshops are expected to start at 10:30am and run throughout the day.

Volunteers who would like to get involved are also asked to get in touch or simply turn up at one of the venues on the day – everyone is welcome!